PLOT: When a research scientist makes national news proving she can track people into the afterlife, Rose (Parker) sees a way out and Teddy (Kohli) sees his chance to finally make it. These two strangers, both harboring dark secrets, race to join the doctor’s contentious study and leave this life behind.

REVIEW: Next Exit takes a subject that has been done to death (contacting the dead) and breathes a bit of new life into the concept. By taking a more scientific approach, the film supposes that they can track your ascent into the afterlife. For those who want to escape the shackles of life, this is their solution. It’s rather dark, but despite mostly revolving around the idea of ​​contacting dead loved ones, Next Exit can be quite funny. There’s plenty of levity brought to every scene, while still keeping things grounded. It can get pretty dark at times because it’s dealing with some rather intense subject matter. Heck, the two leads are essentially on a death march.

Rose (Katie Parker) is lost in the world and convinced that she’s seeing her dead mother wherever she goes. When the Life Beyond Institute announces their “breakthrough with the afterlife” Rose is immediately on board. But refusing to fly to California, she must instead take a road trip across the country to get to the Institute. Only there’s one problem: she has to take fellow participant Teddy (Rahul Kohli) along with her. Cue them not getting along in a pretty standard, road-comedy way. If anything, their emotional journey is a little unbelievable given how much they seem to dislike each other.

After Midnight Mass, I’ll watch Rahul Kohli in just about anything as he brought a layered, nuanced performance. Thankfully here, he plays Teddy, a man who’s trying to get to the Beyond Life event, and he gets to paint with a slightly different brush. He’s a little more of an arrogant asshole with a softer side. He’s given up on life and finally feels like he has purpose now he’s decided to end it. While the performances are amazing, there were some character traits I wasn’t sure of. In fact, many of his interactions with Rose and Teddy make them more unlikeable (robbing a gas station randomly, drunken fighting at a bar, lying about their destination). So I believe it’s mostly the strong acting that somehow still makes you want to go on a journey with these people.

I love NBC’s Ghosts so it was nice to see Rose McIver pop up as Rose’s sister, Heather. The role is really brief but plays a really key role in understanding Rose as a person. I’m not going to lie, the moment that Karen Gillan showed up in full Elizabeth Holmes mode, I was untrusting of the Life Beyond institute. I’m not sure if that was intentional, but it definitely sent my “scam” senses tingling. I really wanted more of her character and she’s in the film far too little, only appearing in promotional videos.

Coming from music royalty, Mali Elfman wrote and directed a myriad of short films that had previously screened at Fantasia. Next Exit marks her feature film debut and she does a wonderful job. It appears as though Mike Flanagan is a major influence on her work, as the production could almost be confused for one of his. Heck, just look at the repeat actors. But that’s in no way a bad thing. She utilizes some very interesting imagery like the ghost appearing on the television before slowly fading into static. Then there’s the whole “afterlife landscape” which is really beautiful, especially for how low-budget the film is. And Mali clearly took her father’s understanding of film score because it is absolute aces. Ariel Marx did an absolutely fantastic job, and really made certain moments better (the final ten minutes, in particular).

There’s a lot to like about Next Exit, from its wonderful performances to its intriguing concept. But the most intriguing aspect is the compelling voice of young filmmaker Mali Elfman who has proven with this that she’ll be a strong voice in cinema for years to come. Here’s hoping that she continues down the horror path and continues to tell interesting stories. I know I’ll be there for her sophomore effort. 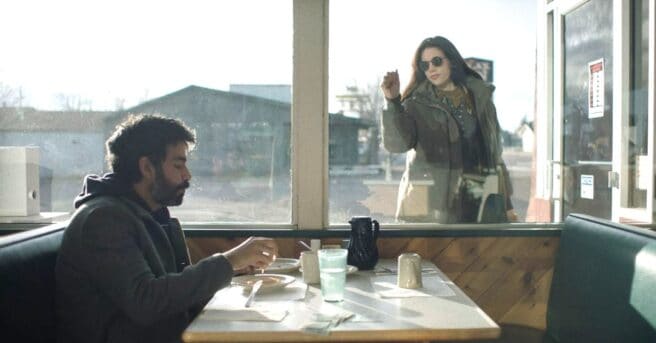